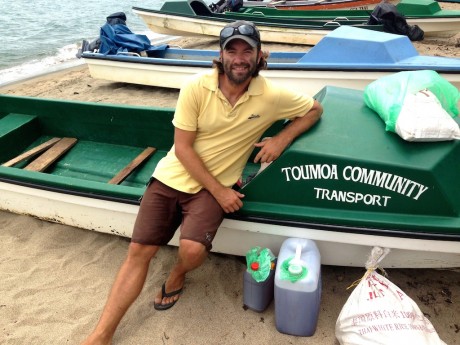 So, you wanna cross the border between Papua New Guinea to Solomon Islands, but are not planning on flying or using your own yacht?

Its quite possible to do this using local boats, now that the situation in Bougainville has become much more calm. It also seems that the immigration laws in the Solomons have loosened up a bit, making it less risky. While I travelled through Papua New Guinea (2014), however, I heard all kinds of stories about people trying to cross over the border illegally, and getting caught. I even heard of one Australian guy who sailed onto one of the islands in the Solomons without visa, and was put to jail for two months!

You should therefore remember that you will in fact be entering a foreign country illegally. This said, the officials are quite aware that there are no immigration office in this remote Western Province of the Solomon Islands, making it impossible to get an entry stamp. Thus, if you do come by local boat, there is no way whatsoever, that you can get an entry stamp before Gizo. They should understand this, and allow you to pass, as long as you get to Gizo as soon as possible after having crossed the border. Make sure that the date of the exit stamp you get in Buka, gives you a some days to run on. They will ask you what exit date you want. I was in Gizo two days after the expiration date of my exit stamp, but the officer didn’t seem to bother.

Being the 5th most corrupt country in the world, anything could probably happen in the Solomon Islands. For me however, crossing over from Bougainville to Solomon Islands ”illegally”, went without drama. In fact, I would be more worried about the open sea you have to cross to get to Gizo, than not having a visa.

The longer version
To do this, you want to go to Bougainville, the big Island in the south-eastern part of Papua New Guinea. You can get there by taking the Coastal Shipping passenger ship ”Chebu” from Rabaul (200 kina), which after 16 hours, will leave you in the cosy town of Buka in the north of Bougainville. In Buka you should try to get your exit stamp from Papua New Guinea, don’t rely on getting it in Buin. You should not try to leave the country without this stamp, since the officer in the Solomon Islands will probably have a hard time believing where you came from. The immigration office in Buka can be found two streets behind the main jetty, from where you came in on Chebu, if that’s the ship you took. You will find the office on the second floor of a newer building. It is also close to the DHL office, if that’s of any help.

With the exit stamp in your passport, you will want to find your way down to Buin. I was lucky and got a ride by no other than the Finance Minister of Bougainville; Albert Punghau himself (read the story here), but you should be able to find transport by asking around the port area. People are very helpful so this should be no problem. The trip to Buin however is quite the adventure, since after a few hours, the road becomes almost impassable, with many streams and rivers crossing the now deteriorating road. But you should be able to do the trip in 5-7 hours though. An option could be to overnight in one of the villages on the way, perhaps Arawa, that was burned down during the war, but is being built up again. I stayed locally in the small community of Siwai.

Make sure you arrive in Buin on a saturday morning, because that’s when the fishermen from the Solomon Islands come to the big market in Buin, to sell their catch. These guys will be your ticket to the Solomons. But beware; by the time most of them are ready to head back in the afternoon, most will have spent of their hard-earned money, getting hammered. Getting to the market early in the morning, is a good idea, so that you have good time to ask around and finding someone trustworthy, and while they are still able to stand.

When you have found your ride, you need to get to the wharf, which is quite a bit outside of town. You will therefore need to take a van or PMV to get there, but your new Solomon guide, drunk or not, should be able to help you out.

Once there, at the very place the japanese forces took their last stand during WW II (look for the cannons), you will quickly see the many smaller boats to the right of the big concrete jetty. One of these will be your ride into Solomon waters. The Solomon fisherman you have found, should be going to Alu (Old name for the Shortland Islands, which they still use, and also seems to be the local name for Korovou, the biggest town in the Shortland Islands) or to one of the smaller Islands that you can see from the beach. I went to the smaller village and Island of Samanago, which was a great option for me. But you will need to stay locally, and thus have arranged this beforehand. You might get lucky and find a fisherman that is going to one of their own small islands, making it possible for you to stay in their village.

You have to be careful here though, since you might end up being stranded in one of these villages, which is another reason to come early to Buin. Not only to arrange the trip with a still sober fisherman, but also to have enough time to buy petrol, should you need it. Going to one of the smaller Islands will put you down about 40Kina (You can use Kina anywhere in the Shortlands), but they might not have fuel enough to take you all the way to Alu. So either you find one that is going to Alu, or you make sure you have enough petrol with you, to get to Alu the day after. I bought 20L, which was about 100 Kina, and would take me from Samanago to Alu, using a 15H motor, which most are using around here. The bigger the engine, the bigger the fuel consumption though.

Ask about all this before you go to make sure. The price of petrol explodes when you exit Buin town. Once in Alu, you will need to ask around for any boats going directly to Gizo. I was there during the election, which made it easy to find a boat. But you might have to stay for a week or so, before you get lucky. Try and find people who are going that way, or wait for any cargo/passenger ships. Most people here get their goods from Bougainville, and not Gizo though.

It is worth noting that getting to Gizo will take you out into the open sea, so you will want a good operator and a decent boat with a good motor. I did the trip in a caravan of 3 dinghies all with 75h engines, which took us about 7 hours. You will be on the open sea half the way there and engines break down all the time, and capsizing is not uncommon. The wind you feel on land, will increase by a factor of ten out on the open sea. If in doubt, don’t go.

Now, before you get this far, make sure you have an outgoing flight, since you will need to present this to the officer. If you do not have this, or are not planning on flying out, you can still get a ”ticket” by booking a flight and then print the itinerary, without buying the ticket, and just letting the booking run out. They have no way of checking the ticket. This could be considered cheating though, but as long as you exit the country within the 6 weeks that the Solomon Islands entry visa gives you, I think that we are being fair.

I was able to enter Papua New Guinea without showing any form of outbound ticket. In The Solomons however, they did ask me for a ticket.

In the end this was not as dramatic as I had feared, and should be rather easy. You just need time and patience, and good weather!

*If you travel by Yacht you will need a seaman pass, and should go to the customs office instead of the immigration office in Gizo. This guide if for travellers using local transport only.

** I will not be held accountable for any problems you might end up in, having used this guide! Best of luck!

Day 78 - The Panguna Mine and the Liberation of Bougainville
Day 140: Visa Madness in Vanuatu