Day 30 – Freediving in the Trobriand Islands 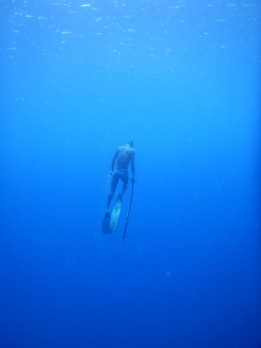 The boat I was waiting for in Esa Ala, had finally arrived on the 6th day of waiting. It came to port at 6 am, waited for me for 5 minutes, and then took off, and where was I? Fast asleep! Because of the heavy rain, was I unable to hear my alarm, and I slept through the early morning.

When I finally got up after 6am, we went straight to the wharf to hear the news. The boat had left. I coulnd’t believe it, here have I been waiting patiently for 6 full days in a small dusty town, and I was’nt on it because I couldn’t manage to get up! Some times I amaze myself! So what was there to do? My only option was to hire a Dhingy and set after the boat. And so that’s what I did. In the placid waters of early morning we set out like pirates in chase of a cargoboat, that had left about 30 minutes prior. Speeding out to sea, it took us around 20 minutes to finally be able to spot the boat out there on the horizon. A Dhinhy is much faster than the cargo boats, so it didn’t take long before we had caught up with it, and I was able to scramble on board. They were all pretty helpful and had the big smiles on. Missing the alarm, cost me 20 liters of gasoline.

The journey hereafter took about 12 hours, and we reached Losuia, Kiriwina, Trobriand Islands with the setting of the sun on the same day. The wharf was teeming with locals. A sea of dark faces stood there waiting to see what the new boat brought to port. Here everybody waits for the boats, where they have cargo coming from other towns, friends or family. Being tired I opted for the option of going straight to a lodge called Lokuia, (formerly Kiriwina Lodge), to crash for the night.

After two days there and spending some time with the locals, which were all very excited to see a white guy walking around, I went further north to the coastal village of Kaibola. Here I was to meet Emanuel, or Manu.

Manu is famous throughout the Trobriand Islands for his freediving skills. I didn’t know this beforehand, so it was a welcome surprise, since I really wanted to do some freediving myself. And lo and behold, not long after my arrival I joined him and his friends on a fishing trip further out at sea. Just before reaching Tuma Island, where it is said the souls of the locals go when they die, we jumped in on a reef. It was an elongated reef that came to about 5 meters depth, and was perhaps 200m long and 50m wide, surrounded by the deep sea. It’s always an amazing experience to jump into the sea in these crystal clear waters, and this time I had my camera ready, and would try to get some shots of Manu’s diving skills. He was able to go down to about 30 meters, and stay there for around 3 minutes. So He went down and circled the reef, coming up from the deep to spear fish on the reef.

It was impossible for me to follow him into the depths, but I managed to get a few good shots, and it was amazing to see his graceful movements through the water. The trick to freediving is to safe your energy. You oxidize your lungs, and when you are ready, you breath out as to reach negative buoyancy, and then you just let your self sink slowly into the depth. If you kick about with your legs, two things will happen, it will prompt your body to use more oxygen, and the fish will be scared off. So it makes good sense to let your self fall into the depth like a leaf, and when you are close to the fish you want to shoot, you strike out. It takes a lot of skill. Not only to be able to stay submerged for long enough, to make it worthwhile, but also to be able to hit the fish you are aiming for in the first place. I can get to about 12 meters, but then I have to hit the surface quickly!

At home we do this for fun mostly, but here they need to catch the fish, to get anything to eat, so they need to be efficient. Manu is able to catch far more fish in this way, than by using hook and wire. But whats more, is that he also go out at night to do freediving in the darkness. They do have some lights, and use them to get close to the sleeping fish. The fish pr dive ratio is a lot better at night, since the fish are more docile in the night.

Swimming around trying to get a shot of Manu in the deep, I suddenly realized that we were swimming with sharks. These were just smaller reefsharks, and was no worry to us. But It always makes my heart beat and extra beat when I see a shark under water. I never should have watched that movie Jaws.

Manu tells me that sometimes bigger sharks come and grab the fish he spears. He speaks of them as big dogs. Just don’t look like you are scared, or scare them off, and they won’t do anything, he says. Now, most sharks here pose no harm to humans at all. But the Tigersharks he has met down there, can potentially be dangerous, and with these sharks you just have to stay calm, and let it eat the fish you have caught. Don’t fight it! No shit!

Things move in a very slow pace here, and I am about ready to continue my journey down to Goodenough Island, from where I will be able to cross over to Cape Vogel, and then north to Tufi, and finally Lae. There are rumors of a cyclone warning however, and that would stop any ship from sailing, so I will have to wait and see what happens, but hopefully soon, I will be able to move on deeper into the adventure!

It has taken me more time to get this far, than I would have thought. Using local transport in the Milne Bay area takes a lot of patience, but once I reach the main land, and the bigger islands, transport should be easier. That is what I hear at least.

If you want to travel through the region, you are able to fly from Alotau to Losuia. If you want to follow in my footsteps though, you will have to get to East Cape from Alotau by truck, then boat to Esa Ala on Normandy, and from Esa Ala to Losuia. It takes 30 minutes by plane, and it has taken me a month by boat! So you really need to have the time. It can however be done faster, if you don’t take all the stopovers I have had. I am in the beginning of my adventure, and have been eager to explore every little bit of the road. When I settle more into the travelling rhythm I do expect my journey to be slightly more streamlined. Time will tell.

I am still undecided whether to make the detour of crossing into the highlands and find a path to the Sepik, and then out through Wewak and Medang in the north and east to continue the journey. The entire PNG region is part of the South Pacific, so it would still be within the boundaries of my adventure.

It’s a question of time rather than anything else. I only have one more month of visa, and by the looks of it, its gonna take me a month from here to the Solomon Islands. So either I do as planned, or try to extend my visa for one month and head inland.

I will have to decide this once I r reach Lae, which is hopefully not so far off now!