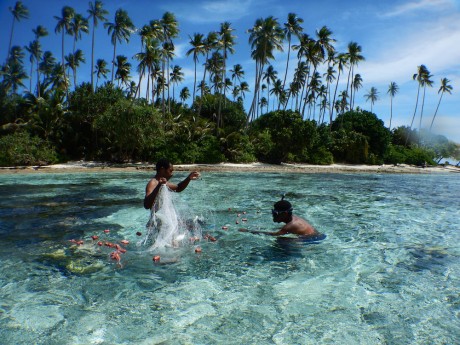 After having spent a few days recovering from jet lag and a mild fever, the adventure could finally begin! And so I set out from Alotau to the easternmost point of Papua New Guinea: East Cape, where Papua New Guinea ends and South Pacific proper begins. Nuakata would be the first Island I visited on my 10.000mile+ journey, and I had the good fortune to spend a few days in the company of the Nuakata fishermen; Fred, Simon and Lawrence. Their Papua New Guinean names were lost on me I’m afraid..

At East Cape I had to wait around for ages, before the one and only boat that would leave for the Nuakata Island was ready. It would not leave until the market day was over, and the women of the village had finished selling what it was that they had to sell. So just about when the wind was at the strongest and the sun at its lowest, we set out toward the darkening horizon.

Soaked through and in the moonless night, I made it to the shore of Nuakata and to the Bomatu family where I would stay for a few days. And it was during this time that I heard rumors of an uninhabited island not too far from their village, where we could go for a few days to camp and catch fish. Not slow to take up on the idea, we soon had crew, a boat, petrol, water, fishing gear and set out to the tiny Island of Grace.

What I thought would just be me on a sightseeing trip, quickly turned into, me being part of these guys daily life. Not that I could help out much, but they were so engrossed by their normal routine; going to these small deserted islands, set up camp for a few days, and catch fish, that I was able to just tag along and watch (and learn). With nets, long line and spear they all set out and did their thing. Incredibly, they caught more than ten 3-5kg sized fish with spear on a single trip.

They are from the nearby Island of Nuakata from where we took off, an Island with about 600 people, all speaking the same native tongue. Amazingly they told me that people from other Islands also had their own unique language. They could understand each other, but the language was different.

While I was sleeping in my tent, they slept on the ground, and I somewhat felt like an astronaut coming to an alien world, with all my high tech gear. I am carrying a lot of gear, and compared to them it feels vastly overkill. But in the end I think they were just as intrigued by my stuff, as I was at their skills. They would stand amazed staring at me and my tent while setting it up, and I would be equally mesmerized by how they, with no apparent effort, built a smoke stand for the smoking of their caught fish.

One thing though that really took me by surprise was their fire making skills. Sure you see people make fire in movies and on TV shows, but how often do you see it in real life? Now I have travelled a fair bit, and while I have met people with these skills before, oftentimes, when it comes down to it, they will just use a lighter or matches.

So, tongue in cheek, not expecting anything, I asked Fred if he could show me how to make fire. And he just looked at me with no particular expression and said “sure”, went into the bush, came back with two pieces of wood, cut it to with a machete and started to carve a hollow indent into the bigger piece of wood, swaying slightly from side to side, and lo and behold within one minute, he had an ember. Within one minute!

Naturally I had to try.. And 45 minutes after with more attempts that I cared to count, I actually finally made it! Good stuff! A great experience, but not something I could easily reproduce. I tried many times after, and also the day after with no luck. Its simply very hard physically to do, and just when smoke start to billow, you need to go fast and hard, which is when you are most exhausted.

These guys were great at what they did. In the heat the fish would get bad pretty quick, so after we brought the daily catch to camp, they would build up this fire, with something like a makeshift table over it, made by 4 Y poles, on top of which they added even longer sticks, where they eventually put the fish. On top of it all they put down palm leaves, and then just kept the fire going. The result was the most tasty smoked fish you can imagine. This way the fish would keep for about a week, and Fred and co. could bring them to town and sell them at the local market.

Being only 10 days into my South Pacific adventure, I’m thrilled at the adventures still ahead, and am looking very much forward to see how the ways of the locals will differ not only from country to country but also from Island to Island.

In fact, by the very first looks of it, it seems to me that every Island has its own culture, skillset and ways about daily life. I might not see it from the outside, but my bet is that the variance does not end at the difference in language or dialects. If you are living like this, while people not very far away have televisions, and drive cars, you either are very proud of your cultural heritage and refuse to change it for anything, or they simply haven’t found a convincing enough argument to change.

Whatever the reason, I’m happy to have experienced a glimpse of their originality!

Annoyingly, though, I have had to backtrack to Alotau to resupply and stock up on cash. Things out here are absurdly expensive, considering how they live. Its like they have no concept of money and just put up any price that looks good. Also considering that there are almost no banks anywhere but in the bigger cities, you will need to stack up a lot of cash to get by. This retracement back to where I started out was not really part of the plan, but I guess it just goes to show how unpredictable these things are. If you want to traverse the South Pacific on foot, you are bound to hit resistance here and there. This time though, it was just me not planning well enough money wise.

Be that as it may, it gave me some extra online time to write this, and also recharge my stuff. More than anywhere I have been before, electricity, running water and connection of any kind are very sparse commodities. Right now I’m on a wifi connection at the Masurina Lodge in Alotau, which cost me 15 Kina flat rate for 60 minutes. I am starting to believe it is the way to go, instead of using the Digicel mobile connection, which is costing a fortune, and is very unreliable. So I’ll probably just have to hit these upscale lodges whenever I need to offload stories and pictures, and then use the Digicel as backup. I spent 80 Kina (40usd) calling my bank back in Denmark for a few minutes. I’m bleeding money in the city, and looking forward to hit the bush again!

The plan from here is to go to the Trobriand Islands, then back to D’entrecasteaux Islands, to reach Tufi, and then Lae. After that I will need to decide to continue to New Britain, or If I want to head into the highlands and into the Sepik river. Not quite part of my South Pacific trail, but nevertheless an amazing opportunity. With travelling being this difficult, I’m starting to doubt the sensibility of taking a 1000+ km detour. We will see.