Day 78 – The Panguna Mine and the Liberation of Bougainville 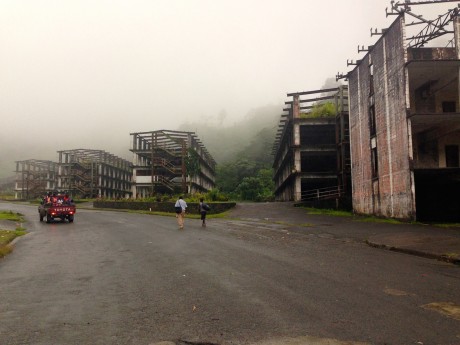 Apart from the rats haunting the Barike Lodge in Rabaul, my stay there was great and gave me a welcome opportunity to explore the lost city of Rabaul. I spent a full day at the vulcano that took out most of Rabaul in 1994; Mt Tavuvur, and on the ruins of the old city. I say on, since you are literally walking on top of what was once old Rabaul. Ash several meters deep covers the city entirely, with only a few walls protruding from the now overgrown ground. The volcano, albeit now a ruin in its own right, still billows, and it all feels like a scene of an ancient world. Hot springs come to life some hundred meters from the foothills of the volcano, and makes for a lifeless and very barren environment indeed.

Back in Rabaul I was in luck. After having visited most of the shipping companies in town, to no avail, I was presented to Mr. Fabien Chow, who, as it happened, was just a few days away from starting a new shipping line, sailing from Rabaul to Buka, where I was heading. From being rejecting for being white at Rabaul Shipping in Lae, I in turn became the first white man on the maiden voyage of Chebu, the new ship owned by Coastal Shipping. It is now possible (2014) to travel between the crucial ports of Rabaul, Buka, Lae and Kimbe in Papua New Guinea, which should help future travellers getting around in this country greatly.

After the ceremony and the blessing of the ship, we took off and set out on the 15 hour voyage to Buka, Bougainville. Onboard, the story goes, I was to meet another interesting character.

Since it was the maiden voyage, and a very important one at that, a delegation from the autonomous government of Bougainville had been invited on board. Thus it was that I was to be introduced to Mr. Albert Bunghau, the Minister of Finance of Bougainville. Having told my own small story, regarding my quest to find a way across the South Pacific via the Solomon Islands, he told me that, in fact, he was going home to the south of Bougainville, close to Buin, which is as far as you will get in Papua New Guinea, if you want to cross over to the Solomon Islands. If I wanted, he said, I was very welcome to join him and his family.

After a few days of hanging about the cosy little town of Buka, we set off in his family land cruiser

I had read the usual stuff regarding the tumultuous history of Bougainville and the Pungina mine. But on this 5 hour-long ride through the Island of Bougainville, Albert would open up the story to me a lot more.

In 1969 an Australian company (Conzinc Rio Tinto of Australia) found copper in the middle of Bougainville, and what would soon ensue, would be the same old story about colonists exploiting the local populace and their natural resources. In fact the story is so common, that it could have been no big surprise, when the Bougainvilleans, started to demand better protection of their lands and compensation for the vast destruction of rainforest. In 1987 they formed a landowners union, that presented these demands to the Papua New Guinean Government and the mining companies, and when all claims were rejected, the Bougainvilleans in turn gathered under the banner of the Bougainville Revolutionary Army.

In the beginning of 1988 they began to sabotage the mine. The mine closed for good in 1989 cutting off about 45% of Papua new Guineas gross domestic product, and started the bloodiest strife the region had seen since World War II. The Bougainvilleans, no strangers to trouble, took up arms and fought back the quickly enclosing Papua New Guinean army. So effective were the Bougainvilleans in their revolutionary efforts, that the Papua New Guinean army withdrew it soldiers and instead opted to break the spirit of the Bougainvilleans with a decade long blockade.

10 years went by, until the president, Julius Chan finally, had had enough, and hired South African mercenaries to end the civil war, once and for all. It ended the crisis all right, but not quite how he intended. With the plan having been exposed before it could be realized, the people of Papua New Guinea, and most of the army turned on the president for being completely out of his mind, and when he finally stepped down, a truce was finally agreed upon.

In 2004 the new Autonomous Government of Bougainville was formed, and their demand of a referendum of independence within 2020 was reluctantly accepted. 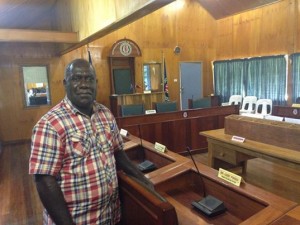 Mr. Albert Punghau, who fled to the jungle and lived there for 10 years during the war, was called in as an advisor, to assist the rebel army during the tough process of hammering out a new constitution. Having worked on the Panguna Mine project as an accountant prior to the war, he had intrinsic knowledge of Bougainvilles quintessential Arkenstone; and main reason for the bloodshed; The Panguna Copper Mine.

Thus it was that Mr. Albert Punghau eventually ran for office in 2010 and that same year became the Finance Minister of the new Autonomous Government of Bougainville. If they succeed in gaining their independence in or before 2020, he will play an instrumental part of the reopening of the mine. This time on their own terms.

We drove through the ruins of the Panguna Mine, with its burned down buildings and factories. And I cannot recall having seen such a post apocalyptic sight before. The contrast between the otherwise paradisic Bougainville and the Panguna ruin, is immense. The whole area looks like it has been lost in time, as if a bomb has exploded and stopped everything in its tracks. It seems, but only seems, that one could turn on a switch, and the processing plants would start working again. Everything has fallen apart, however. Power lines have been bombed, they lie there along the road, slowly being swallowed by the jungle. The processing plants have stood idle for almost 20 years now, and of course nothing would work anymore.

If the Bougainvilleans are to start up the mine again, it will require a billion dollar investment. An investment that cannot be done without foreign partners. Only time will tell if, once again, history will repeat itself. But by the blood of more than 20.000 people, I trust, however, that the Bougainvilleans, will not so easily forget their past.

In fact, the Australians, who did have an important part to play in all this, do have a chance to redeem themselves. And It will quite likely be another Australian company that ends up investing in the project. Not only are the Australians the old colonizers of Bougainville and exploiters of the mine, they also have a hell of a cleanup to get on with.

Time will tell what will happen. But the jet black warriors of Bougainville, have at least shown the world, that playing string theater with its people do in fact royally piss them off.

Its been an insightful and a very learning experience to spend a few privileged days with Mr Albert Punghau and his family, who live in a part of the world where the shadow of the fat honourless finger of colonialism still lingers on.