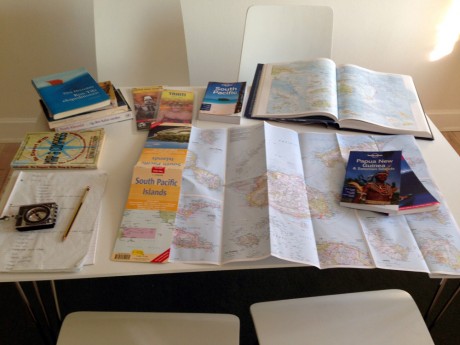 I have just bought the first one way ticket of the adventure!

A pretty big step for me. These are no longer merely words or thoughts and ideas, they are all part of something that is going to happen! The ticket pretty much sets the date of the start of the whole journey, and it will be the 31st of August 2014! I found a ticket that went trough Doha in Qatar to Manila in the Philippines, and then finally to Port Moresby, Papua New Guinea for a little less than 1000USD (From Copenhagen, Denmark).

I didn’t buy any cancellation insurance as I don’t want to have the option to opt out. I’m doing this!

I always get this sense of thrill when I have finally set my mind on a flight plan, and then going for it. I have been looking for flights and dates for over a month, and tried to get a feel of how it would be to actually buy it. It will probably be the biggest adventure I have ventured into, and so it has taken some guts on my part to actually decide to really do it. “Is it a good idea? Can I afford it? Will it be dangerous? Shouldnt I just get a job?” Hell no! I will probably come back to this line of thinking in other posts, but it strikes me time and time again, that the challenge of the adventures we set off to do in our lives, do not merely come from the adventure itself, but in fact mostly from the stigma, dogma and the huge pressures of the norm that surround us, every day. How many people are hammered into squares they do not fit into, but lag the strength or power of thought, to break free?

For me too the biggest challenge becomes the mind battle between what I probably ought to do and what my heart tells me.

I’ll trust in my heart on this one, though!

Having bought the ticket, you are somewhat more at the point of no return, and the magnitude of what you have set out to accomplish start to dawn on you. And It feels awesome!

I went to this old map shop (Nordisk Korthandel) in the center of Copenhagen to look for maps. I got a nice 1:2,000,000 of Papua New Guinea. Pretty large-scale though, but it does give me a nice overview of the region. Also I got a bigger South Pacific Islands map, and one 1:100,000 of Tahiti. I’m gonna need more maps before I leave, but this will do for now. They aren’t cheap!

I always buy maps of the places I visit, and absolutely love to look through them, and imagine myself being there, looking for streams, rivers, mountains and wonder who lives there. Especially in the region of Papua New Guinea. A whooping 800 languages come from that region alone. For 800 languages and dialects to evolve, in such a relatively small area of the world, tells tales of hidden valleys, impenetrable jungles and mountains. The variety of culture and color defy imagination, and it will be the perfect starting point for my adventure.

I have spoken to a friend of mine who has contacts with GoPro, and I will be looking at getting some gear pretty soon. Hopefully I’ll be able to make a few videos of all this planning.

Next up will be handing over the reins on the job and getting ready to move out of the apartment! In the meantime I will be working on an inventory list for the expedition.